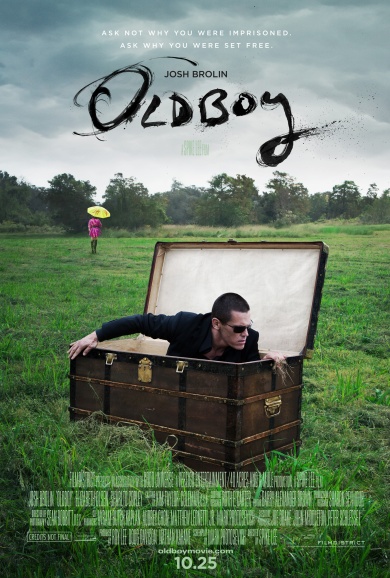 I suppose if I hadn’t seen the original Oldboy I might actually like Spike Lee’s version. While it’s not necessarily a bad movie, it’s just not as good. Don’t get me wrong the Josh Brolin and Elizabeth Olsen are great. Samuel L. Jackson is fantastic as the warden and Sharlto Copley is affluently creepy as The Stranger.

There were minor plot changes to make it more palatable for an American audience. For some reason we can deal with creepy rich Europeans molesting their kids, better than we can deal with a brother and sister fucking each other. A lot of the edge was taken off this movie in this remake. I would have loved to see Josh Brolin bite the head off of a live squid. The twists are all the same, no new surprises to fans of the first.

I was pissed to see that Spike had ruined the hammer scene. He made it into cheesy cartoon violence straight out of an old kung fu movie, where a giant group of villains nonsensically attack one at a time. In the original the fight takes place in the confines of a narrow hallway and is more believably executed.

It just didn’t feel like it had any Spike Lee characteristics. I didn’t feel his touch on the movie at all. It felt half-assed. It wasn’t a shot for shot remake, but it didn’t stray too far. I’m not sure what Spike was trying to accomplish with this remake other than make a quick buck. It’s kind of sad to see a once great director floundering in the twilight of his career. Like this movie Spike Lee has lost his edge. He’s become a caricature of his former self. It’s like he’s fallen into the George Lucas trap of believing your own hype and thinking you can do no wrong.

You can call me a hipster, but the original is far superior. Like I said in the opening if I wasn’t a fan of the original maybe I would like this version. I’m sure somebody thinks it’s superior to the original and that person’s name is Spike Lee.

If you’ve seen the original don’t watch this remake, except out of morbid curiosity. If you’re one of those people who “ain’t tryin to read no movie.” Then this remake is probably right up your alley.